a perfect day for thunder [Luhan/Lay]

a perfect day for thunder
Luhan/Lay
R, 1,543 words
It takes Luhan forever to get out of bed that morning. Every day it gets a little worse.

a/n: wow, I'm not sure what this is. trying to get back into this… 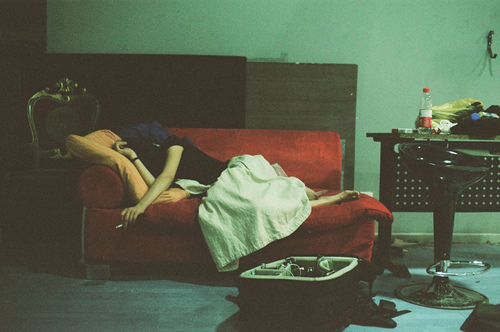 It takes forever to get Luhan out of bed that morning. Every day it just gets a little worse. Luhan is addicted to sleep; addicted to the way he feels wrapped up in his blankets, all warm and trapped and suffocated. He hasn’t let anyone sleep in the same bed as him since he needed his mother’s warmth as a child. He thinks he doesn’t need anyone anymore.

Yixing makes a habit of keeping the blinds closed in the morning. Luhan always shies away from it when he first opens his eyes. He squints even in the dimmest light when it’s still morning. Today, though, it’s the afternoon when Luhan finally opens his eyes. He stares at Yixing in his own bed, blinking until Yixing gets up and goes to him. Yixing is reading, absentmindedly. He tosses the guitar magazine aside and it falls to the floor.

He lets Luhan grab his hand. His fingers are gentle during the day, and soft. At night, Luhan’s touch is vicious and they only fool around in Yixing’s bed if they even do anything at all anymore. Sometimes Yixing thinks Luhan considers sex unclean and wants his bed to remain pure. If it weren’t for these looks in the morning—those fragile hands touching his wrist—Yixing would think that their relationship was almost over. He’d always thought he’d sleep in the same bed with whoever he happened to end up with. Luhan is strange. He’s been an enigma since the beginning.

Collarbones peek out from beneath Luhan’s comforter. After all this time together, Yixing is still amazed by the shape and form of his body despite his angelic face. He wants to touch Luhan now, but sometimes it’s better to let Luhan do the touching first. If Luhan wants it, Luhan will go ahead and take it. A dull ache suddenly reminds him that he hasn’t been inside Luhan for over a week.

Yixing watches Luhan stretch and whimper when his back cracks. The sound he makes sends shivers up Yixing’s spine. Luhan lets go of Yixing’s wrist and it seems like he’s going to sit up, but he stays there, hands digging into the fabric of his blankets, eyes wide open and staring in the opposite direction. Yixing leaves him like this, but tells him, “It’s two.”

He doesn’t expect Luhan to respond. Someday he’ll wake up and Luhan will be lost in sleep forever. Perhaps it won’t be the case, but Yixing can’t help but worry.

He’ll count the hours that he’s awake when Luhan isn’t.

“Coffee,” says Luhan. It’s already been made. Yixing is good about that. “You don’t have class today,” he comments as he narrows his eyes at the calendar placed at his eye level on the fridge.

“Right,” he laughs. “Sorry. Still asleep, I guess.” There’s a pack of cigarettes on top of the fridge that Luhan reaches for. It’s not out of his way, so he takes it down and shoves it into the large pocket of his hoodie for later. Right now, it’s coffee that he wants the most. Maybe a smoke later, and maybe a good long kiss from Yixing to finish everything off and to remind Yixing that he there is still something there between them. Luhan draws people to him and then they stay for what feels like a lifetime, orbiting around him for too long.

“You have class at six, though,” Yixing reminds him, sitting down at the tiny kitchen table.

“I don’t know,” he replies. Childlike. He stands there, in front of Yixing, in a hoodie that is almost too large for him, boxers, and his hair mussed from tossing in his sleep. His real physique is hidden, and so he appears too young, too little and too confused to be an adult.

The sleeves are long, too. Luhan takes a tentative sip from his red mug, and then a bolder one. The heat doesn’t bother him. And when he smiles, Yixing smiles too. “Will you go to class if I walk you there?”

Luhan keeps smiling. “I’ll think about it.” Yixing wants to make Luhan laugh. He’s good at making people laugh, but only when he’s not trying. It’s not going to work now, though. Luhan can only smile and drink his coffee. He won’t eat breakfast, even when Yixing offers him the toast he made for himself.


Yixing knows how badly they need to go grocery shopping, so he takes Luhan out with him today. It’s unlikely that Luhan will go to his one class today. But Luhan also surprises Yixing now and then. He reaches for Yixing’s hand halfway there and doesn’t let go until he needs both hands. On the way back he lags behind and smokes.

Even though the sun is out, there are storm clouds far away. Yixing doesn’t want to make any comparisons. They’re too clichéd by now. He just waits for Luhan at the corner, and thinks about how he won’t wait for the storm. It’ll come when it comes. It’s time to go home.


The thunder comes out of left field. It startles Luhan out of his chair. His palms will be bruised come tomorrow, but Yixing thinks of other things and runs to him. The floor shakes a little with each rumble but the first was the worst. It shakes Luhan to the core, his eyes widening until Yixing peels him off his hands and knees. He needs a little extra strength to do it, no matter how light Luhan is on his own. His body is tense and afraid—uncomfortable because Luhan hates being vulnerable like this. Somewhere in the back of his mind he is cursing himself for being this way.

Yixing knows how unstable Luhan is. He is constantly reminded of it when there is thunder. A day like today will remind him of everything that those on the outside looking in on them would tell him to leave. Yixing has always ignored them.

“Always a baby when there’s loud noises,” Yixing teases, dragging Luhan into their room. He doesn’t expect Luhan to retaliate now. Later, when he’s not afraid of the rumbling that’s shaking him from the inside out.

He pulls down until Yixing is on top of him, pressed together completely, settled between his legs. Yixing can still feel him trembling just a bit, but he steadies Luhan with a hand on his hip, sliding underneath his shirt and maybe Luhan knows how long it’s been. Maybe Luhan has been counting the days, not that Yixing has.

Luhan whimpers something, but their mouths are too close together for Yixing to tell if he’s trying to moan or speak. He feels fingers tugging at his shirt, though, frantic in nature and somewhat neurotic like how Luhan can be from time to time. Luhan allows Yixing to undress him and does the same in return. This is a routine they’re familiar with, no matter how many days or weeks it’s been. Some point during their touching, when Luhan is ready, Yixing wonders if Luhan will regret this tomorrow when he wakes up. Luhan likes sex, it’s true. He likes being fucked, but he’s not one for touching or showing weakness.

Yixing watches his face rid itself of fear and fill with something else. His weakness is showing, between the pleasure and pain he feels from being out of this routine. Luhan looks as if he may cry. He’ll regret this tomorrow, Yixing is almost certain of it. His cries sound pained but Yixing doesn’t stop. After he comes, Luhan closes his eyes and Yixing pretends that he’s just fallen asleep.

The routine ends with Yixing kissing Luhan’s face and crawling off to sleep in his own bed, but he stops at one kiss, and holds him. Luhan’s body is relaxed and warm, and he does not fight him off. Yixing looks at him one last time before he drifts and can’t keep his eyes open, hands tired from touching.

Open eyes greet him when he wakes. They stare, eyes full of each other. They haven’t done this in so long. “It’s seven,” says Luhan.

He remembers thunder in the back of his mind, everything slows, he sees Luhan’s face in the dark and then he sees the real version again in front of him. This face haunts him. The hands he associates with this face are still touching him, not shying away. This is new. He feels every inch of Luhan’s skin that’s in contact with his own and feels the air on his exposed arm. It’s going to be a sunny day. He reminds himself that the face that haunts him may still love him.

before I run off to write something else, thank you to my lovely

13fireflies for making me feel motivated again! I promise I will write you something better than this ♥